Win a new Armida A5 by clicking HERE!

When I started diving back in the ’60s, I saw lots of different dive watches. Most numerous were the Seamasters and Submariners. But I immediately encountered dive watches that were different in shape and character, with names such as Doxa, Aquadive and Certina. My first dive instructor had just obtained one of the new Doxa SUBs, and I was entranced by the orange dial. Another instructor I worked with in the early ’70s had just acquired a Certina DS-2 Super PH1000m, and I loved the massive – for its time – proportions of that watch. 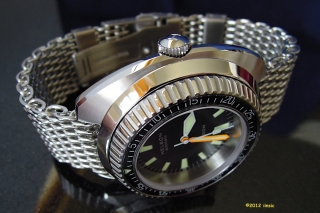 Anyone who spends any time on the dive watch fora knows that the SPH1000 is a coveted watch, whether the original DS-2 or the subsequent DS-3 (which was identical in all respects, right down to the reference number). So much so, in fact, that Certina introduced a similarly styled limited edition – also called  the DS-3 – which quickly sold out, despite a production of 1,888 pieces. Today, the original DS-2 and DS-3 SPH1000s (and the somewhat different LE DS-3s) command prices well in excess of their original selling price – on the rare occasions when one surfaces in a “for sale” posting or on eBay.

In other words, the SPH1000m is only available as a vintage watch, similar to the original Omega Seamaster 600 Plongeurs Professional. This, sadly, despite Certina now being a part of the Swatch Group and certainly having the resources to resurrect a beloved dive watch (as sister company Omega did with the PloProf, now replicated by the SMP1200).

For many of us who love nearly-extinct dive watches, Peter Helson of Helson Watches is a boon companion. His company has produced a number of faithfully reproduced homages to great dive watches, including the Sharkmaster 1000 (Omega SM1000), the Tortuga (Squale), the Skindiver (original Blancpain Fifty Fathoms), and the Sharkmaster 600 (Omega SMP600 PloProf), to name a few. Now Helson Watches gives us a new watch to love: the Helson Turtle, a beautiful homage to the original Certina DS-2 Super PH1000m.

The dimensions of the original were maintained: A 43mm diameter (excluding crown; 46.2mm with the crown) and just shy of  47mm lug-to-lug. Lug width is 20mm. What was unique about the SPH1000 when it was introduced at Basel in 1970 was its 1,000 meter depth rating, almost unheard of in a production model mechanical watch. It was accomplished by a case that featured thick, sturdy components. Combined, the watch is almost 18mm in height. And so is the Helson Turtle. Weight is acceptable for a watch of this size, coming in under 190g on the mesh bracelet – heavy enough to feel substantial, but not so heavy that wearing it becomes a distraction.

And the crown is a good size, at slightly more than 6mm in diameter. It is easy to unscrew, pull out, turn and screw back down – actually better than other dive watches that cost considerably more. 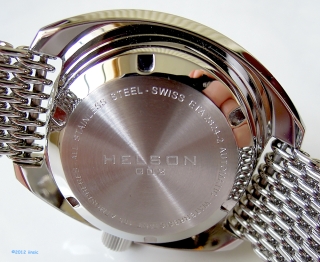 Fit-and-finish – a Helson strong point – is excellent. This really is a resplendent recreation of a classic, iconic dive watch. Like the original, the Turtle features a case that combines polished and brushed surfaces, although polished surfaces predominate. Some might see this as a flaw, despite the original Certina being finished the same. But, to me, nothing looks more handsome than a dive watch with polished surfaces scarred up by years of use on dives.

Helson has taken the liberty of allowing for refinements not available in the late ’60s when the original was designed. It features a sapphire crystal, a 120-click bezel with a sapphire insert, an ETA 2824-2 25-jewel automatic movement with 40 hour power reserve, and C3 SuperLuminova on the hands and markers for low light visibility.

A dive watch – especially one rated to a depth of 1,000 meters – belongs in the water … and that is where I headed to check out the Turtle.

I found the mesh bracelet to be sturdy and secure, and easily could adjust to fit over a thin wetsuit (and if more than “thin” is required, the water is too cold for me). However, I think I prefer the strap in the water. In fact, I likely would use this watch on a NATO or GGB for extra insurance against a pin failure (although, in all honesty, I have never had a pin fail underwater in 45 years of diving; just more of a belt-and-suspenders mentality).

The design of the SPH1000 bezel was a popular one in that era – deep grooves that tapered to a narrower top to reduce the likelihood of the bezel shifting from a strike. According to Colin Millar, an expert diver as well as a recognized watch collector, the original SPH1000 had a push-to-turn bezel, but that feature is abandoned on the Turtle in favor of the standard unidirectional spring-ratcheting bezel. I found the bezel on the Turtle to be rather stiff, but after doing a half-dozen spins, it became much more pliant. Wearing reef gloves, I found the bezel easy to set underwater.

Normally, the water in our part of the Gulf of Mexico is crystal clear, but a persistent westerly wind – the posterior effects of Tropical Storm Beryl – had kicked up a lot of sediment due to rough surf. Regardless, I found the dial easy to read underwater. In what I perceive to be a big plus, Helson has moved to very Spartan dials, and the Turtle is no exception. Only three words appear: Helson; automatic; and 1000m. That lack of clutter minimizes distraction and makes for a very readable dial, especially in minimal visibility. Thumbs up, then, for this design element from Helson. 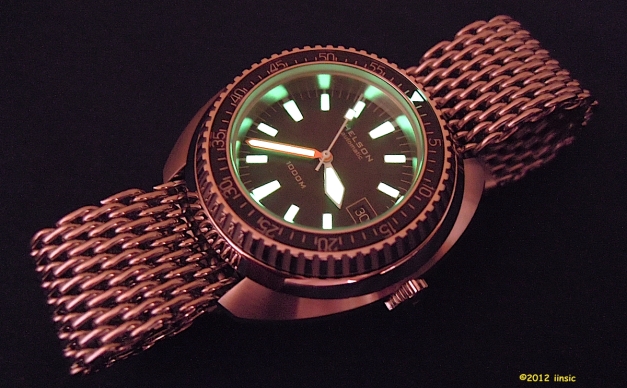 Because the watch is pretty tall, it tended to slip around the wrist underwater on the mesh, but stayed well in place on the rubber. Again, this is where a strap such as GGB would excel, keeping the watch solidly – but safely – centered on the wrist and further reducing weight.

For me, a dive watch has to do more than perform well underwater. On a dive trip, taking even a pair of watches – one for dives and another for surface wear – makes little sense. The relatively modest proportions of the Turtle – at least by modern standards – make this watch quite wearable on dry land. After several days of wearing only this watch on the mesh, I must confess that it has the ability to be unobtrusive on the wrist … until one looks at it. Those lovely, classic lines then make it difficult to look away.

The Helson Turtle will be available with black, orange or yellow dials, all with black bezels. It will include a mesh bracelet with deployant clasp and safety, along with an assortment of extensions for proper fit, a textured, perforated rubber strap, spare lug pins and a bracelet changing tool, all packaged in Helson’s now-familiar padded, waterproof cylinder. Price will be US$899, including shipping, and the watch will be available in mid- to late-June.

Peter Helson has kindly provided photos of the Turtle with orange and yellow dials, in response to the many requests to see them. Also included is a “group” photo of the trio. 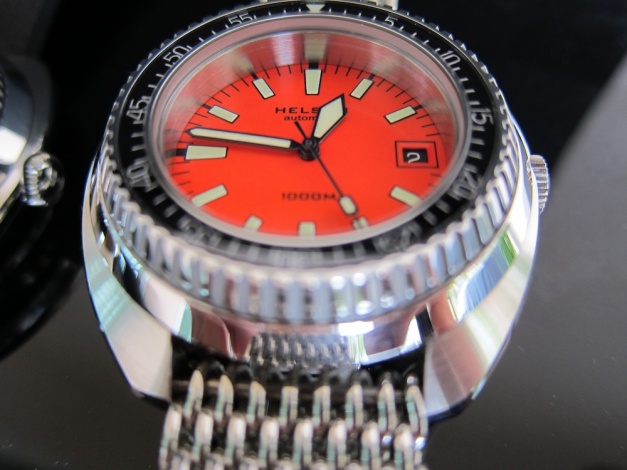 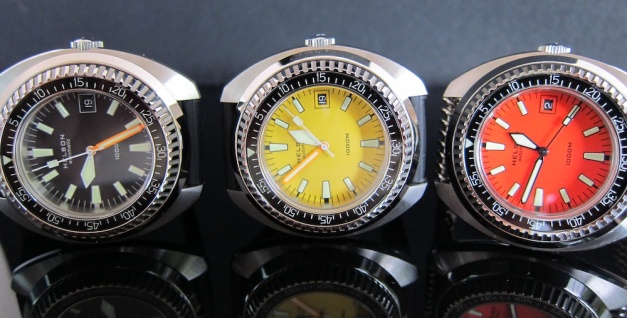