Boschett spears a winner with ‘Harpoon’

Win a new Armida A5 by clicking HERE!

Boschett just started shipping their new Harpoon dive watches, and it looks like they’ve got themselves another winner. I’ve dived with their popular Cave Dweller II in Cozumel and thought it performed exceptionally well in a variety of visibility conditions. But, spec for spec, the Harpoon has taken the CD II to a whole new level.

The Harpoon incorporates many of the most popular features of the CD II, including the bracelet’s ratcheting clasp, which allows for a proper fit over a wetsuit. It also retains the uncluttered dial of the CD II, and the supple five-link bracelet. But the Harpoon packs on the added features, starting with an ETA 2824-2 automatic movement (the CD II is only available now with the Miyota 8215). It features the quintessential “status” feature – that is, one that almost everyone wants on their dive watch but almost no one needs – with an automatic helium release valve. The second status feature is the 1000m water resistance rating, another bit of overkill given that no human has ever dived below 701m – or ever will.

But ridiculously high depth ratings are considered an essential part of what makes a real “tool” watch, so the Harpoon does not disappoint. With its massive case and 4.34mm-thick sapphire crystal, you know it could go that deep, even if its wearer never could.

What really makes the Harpoon stand out is how compact it actually is for a 1000m diver. The bezel features a raised saw-tooth grip that makes turning with even the thickest gloves a cinch. But even with the added height of that serrated lip, the Harpoon is more than a mm thinner than the CD II, at only 15.3mm.

And the Harpoon has a surprisingly short overall length of 52mm, owing to short lugs which turn down sharply to hug the wrist. Consequently, despite its nominal 44mm diameter (actually, closer to 47mm across the diagonal), it wears much smaller than one would expect.

Of course, while it might wear smaller in physical dimensions, it makes up for that in weight, topping out the scales at a stout 275g. That’s more than 3/5 pound! If you like a hefty watch on your wrist, the Harpoon will never let you forget you’re wearing it.

The caseback graphics on the Harpoon deserve a special mention. Etched in deep relief is the image of a male silhouette poised to hurl a harpoon into the gaping maw of a horrific sea monster. The intricate design was the creation of Dave March, a graphic artist in the Tampa Bay area, who offered it to Keith Boschetti when he solicited design ideas on WatchUSeek. Frankly, it is one of the most appealing – and theme-appropriate – caseback designs I have seen.

In the water is where the Harpoon really excels, an excellent attribute for a dive watch. Its weight does not seem that significant once you’ve been wearing it for a while anyway, and becomes even less noticeable underwater. As mentioned, the saw-tooth bezel is extremely easy to grip, but it has a strong enough spring that it should not accidentally turn if the bezel should strike a surface at the wrong angle. And the dial is a thing of simple beauty … easy to read at a glance. 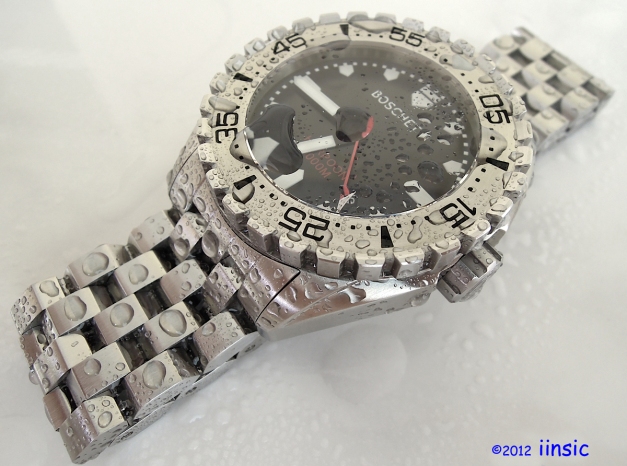 The lume is BGW9, which seems all the rage these days (as C3 was not that long ago). So much lumed area is provided on the dial and hands that, fully charged, you might need to tuck it into the bedside drawer, lest the glow keep you awake at night.

Finally, Boschett provides the Harpoon with two interchangeable bezels. The all-stainless bezel was shipped on the watches, and a version with a ceramic insert will be shipped in coming weeks. 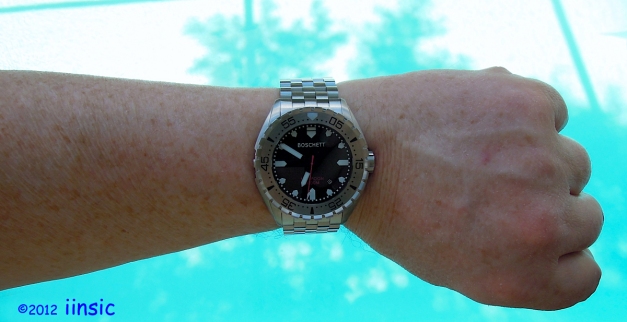 The Harpoon is one of the best divers to spring forth from the mind of owner Keith Boschetti. Even more appealing, it is priced less than a hundred bucks more than the ETA version of the CD II, despite all of its extra features. If you like dive watches with some heft and size, no blingy features and excellent underwater capabilities, the Harpoon is hard to beat.

3 comments on “Boschett spears a winner with ‘Harpoon’”